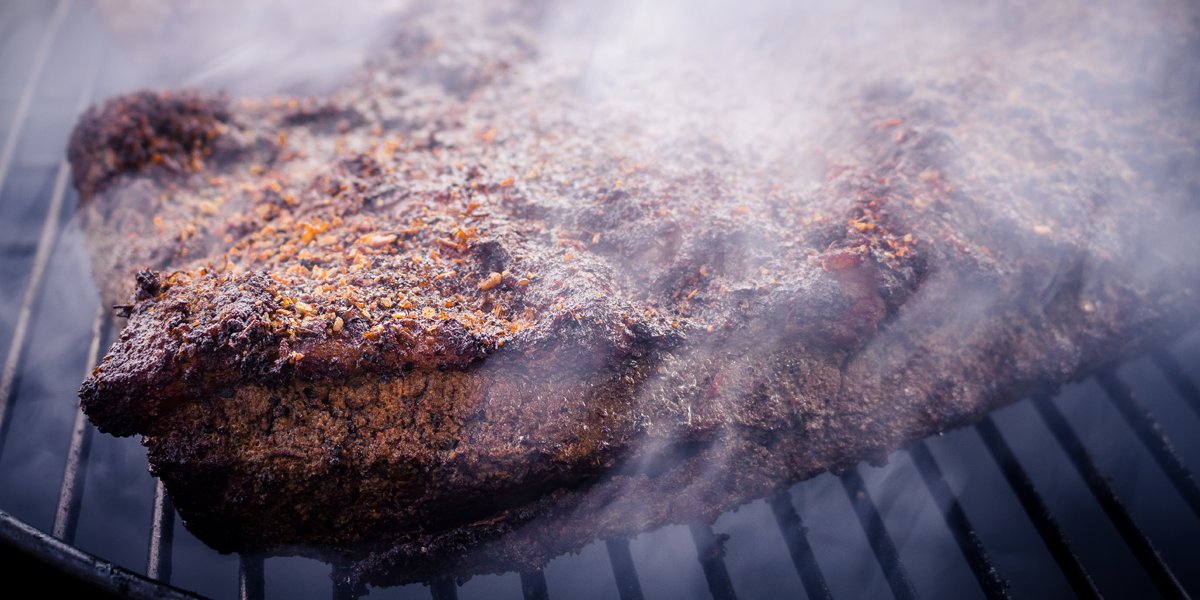 The Science of BBQ - The BBQ Stall

The very first time that I smoked anything, it was a disaster. I had no idea how to control temperature and didn't know what to do when the meats' temperature stalled out. So, there I sat, fiddling with the vents on my Apollo® Smoker, adding charcoal, and freaking out while my family sat watching impatiently from the dinner table.

If you use a smoker with any regularity, you have probably heard of this phenomenon before. The dreaded stall. Also known as the plateau or the zone. What is the stall? What causes it? And most importantly, how do you get past or avoid the stall? Find out here in this article.

What is the Stall?

The stall, the plateau, or the zone occurs when smoking or cooking larger cuts of meat at low temperatures for extended periods of time. It is when the interior temperature of that meat reaches about 150°F to 170°F and stops going up. This state can last for hours.

A friend and smoking enthusiast, Stew (@s2bbq) has worked smoking down to a science, however, even he admits things don’t always go as planned. A pulled pork dinner with friends, which he had done several times before, once took three and a half hours longer than expected. Even after wrapping the pork at 160°, he had a huge stall. Stew eventually resorted to cranking the heat, something he doesn’t like to do. Needless to say, dinner for 6-ish was at 9:30, and the pork did not get rested at all. It was still delicious though.

What Causes the Stall?

The stall is caused by the evaporation of liquid on the meat's surface. This evaporative cooling works just like when you sweat while working hard. The stall can get frustrating because it lasts for hours. It is because the heating rate of the meat and the temperature of the smoker matches that of the rate of evaporative cooling.

Does that mean that your meat will lose all of its moisture and turn into a dry hunk of yuck? No. First of all, the meat won't remain in the stall forever. There is a finite amount of excess moisture available to be consumed when meat is in this state. The rest of the moisture in the meat is tied up in the collagen, fat, and protein where it will remain to create that succulent meat jello that we love. Once that excess moisture is used up, your meat should start raising in temperature once more. 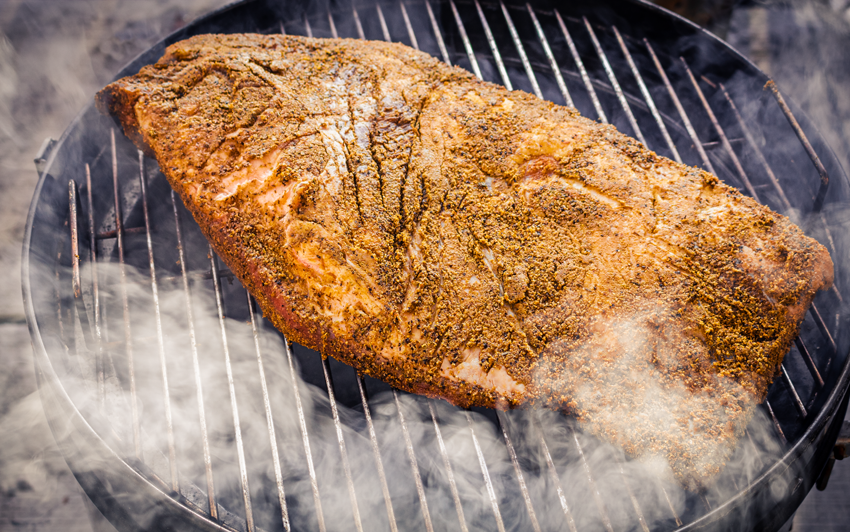 Factors that Affect the Stall

There are many factors that can and do affect the stall, whether it's for the better or worse. Airflow and humidity are the two biggest.

The weather can sometimes have a huge impact on your smoke. Stew had planned to do an overnight smoke on a 10 lb brisket. The day was slightly overcast, not too hot or cold or humid, and there was no wind. There was also no stall whatsoever. The brisket, which should have been ready at 4 am, was done before they went to bed! It was well wrapped, rested in a cooler until morning, and, when served, pretty darn good. Weather, the density of the charcoal being used, the density of the meat, airflow, and moisture can all make a difference in the way your smoke goes.

Airflow
The more airflow in a smoker means the lower the stall temperature will occur at 150°F as opposed to closer to 170°F in a completely sealed unit. This is most noticeable in wood and bullet-style smokers where there are multiple parts, ports, and such like. This doesn't make these units less effective at smoking an award-winning brisket, it is just a factor that you need to be aware of when using them.

Basting, mopping, spraying, and using a water pan do make an impact on your cooking time by lengthening it. Cool liquid and/or liquid vapor are landing on the surface of the meat and cooling it as the liquid evaporates - the conditions that create the stall in the first place. That doesn't mean that you don't want to use any of these methods when smoking. You should use at least one of these when smoking to ensure that there is enough moisture available to the meat to keep smoker temperatures at a good smoking level for flavor transference and to keep the process slow enough for the collagen and fat to render properly.

How to Get Past or Avoid the Stall

You can wrap your meat in foil to avoid or get past the stall. This technique is known as the Texas Crutch. By adding some liquid - juice, wine, beer, watered sauce - and tightly wrapping your meat in foil, you create an environment of nearly one hundred percent humidity, effectively braising the meat during the second half of your smoke. When you take this course of action to avoid or get past the stall, remember to finish cooking your meat to its finished temperature - as per the recipe - before unwrapping as evaporative cooling will cool the meat quickly when you unwrap.

Many purists of smoking are likely falling to their knees screaming "Won't someone think about the bark?!" And they do have a point. If you like your bark crisp and hard, the Texas Crutch may not be your ideal solution. Some will use butcher paper instead, stating that it is a great "in-between" solution, just remember to get unwaxed paper because the coating will melt. You can also re-solidify bark by hitting it with a little dry and high heat before slicing. 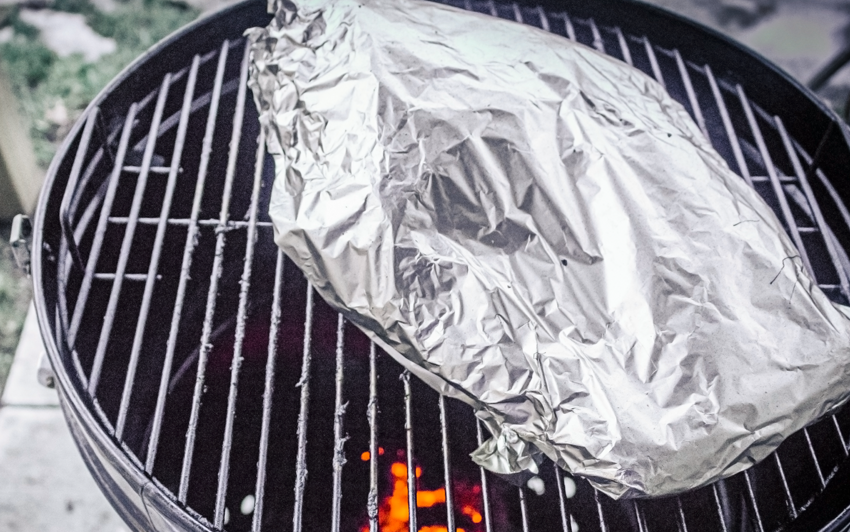 If the prospect of soggy paper gives you the heebs as it does for me, then you can opt for raising the temperature of your grill to try and get past the stall. As mentioned earlier, evaporative cooling is causing the meat to remain at a steady temperature. Increasing your cook temperature will not prevent the stall but can shorten the time that it will take. The principal thought is to use heat energy to overpower the evaporative cooling temperature. This is because at lower temperatures they tend to balance each other out. The downside to this technique is the danger that the heat will disrupt the rendering of fat and connective tissue and cause the meat to become tough. Increasing your smoker's temperature from 225°F to around 325°F until the meat is done will also ensure a better bark and can be effective on pork shoulders, however, results are not so great with brisket.

Specifically, for briskets, you can separate the point and the flat before smoking. Rub them both thoroughly and smoke them at the same time while monitoring both of their temperatures individually. That way you can decide if you need to wrap the flat or not. The benefit being that the point will develop a deep bark and smoke ring, which are ideal for burnt ends. 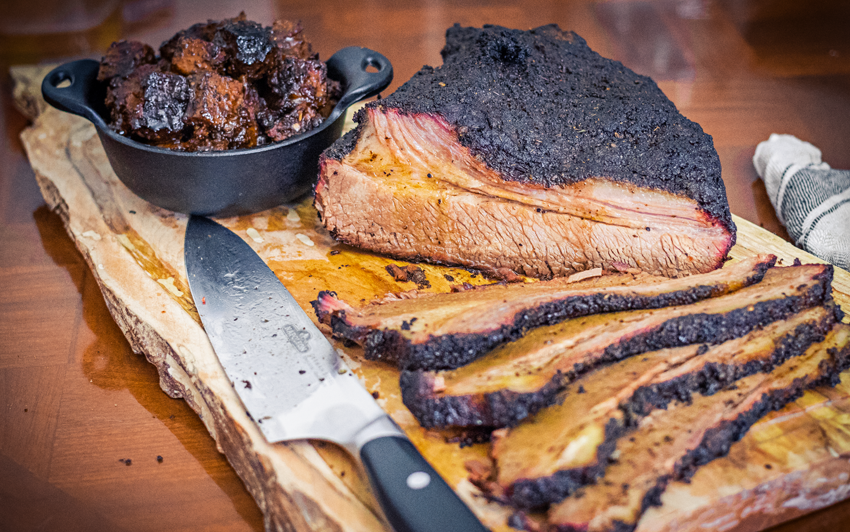 Finally, you can set your smoker up for the long haul with a water pan and just let it go. Many people use the no-peek technique and will plan the smoke with the stall (and even a second stall - which can happen) in mind. Set your smoker up, only opening things to add more water to the pan, or more charcoal and wood to the basket as needed. Using a wireless digital thermometer like Napoleon's Wireless Bluetooth Digital BBQ Thermometer will allow you to monitor both the grill and the meat's temperature.

Tell us how you manage the stall when you smoke by using the hashtags #TheSmokeStall and #NapoleonGrills and tagging us in photos and comments on our social pages like Facebook and Instagram.

General
How To
Recipe FAQ's